In all the closets and nooks and crannies, and churches have many of all of those. We called and emailed members who might know where they were. We searched again.

All to no avail.

Several of our Christmas Pageant costumes were gone.

Some were there. The shepherds’ robes and some angel halos were where they were supposed to be. A few odds and ends remained that had once been clothing and accessories but were transformed with time and imagination into ancient Near Eastern everyday wear.

But the lamb ears and angel wings were gone. The box where they resided during the off-season was there, but mostly empty. One lone set of lamb ears remained under a child’s western hat.

Maybe they’d been taken out and used for another church event and not replaced. Maybe they’d been placed in another storage box, and we’ll find them during a search for something else in August. Maybe someone decided they needed lamb ears and angel wings more than the children on Christmas Eve and absconded with them in the dark of night. Maybe gnomes took them.

But what we did know is on December 23rd at 2:00 pm, discovering an absence of pageant costumes is not a welcomed Christmas gift.

I did know that asking, “Why?” wasn’t going to be all that helpful and replaced the question with, “What now?”

A Facebook post, a shopping trip to a local Halloween costume store, and a few phone calls later and we suddenly had more costumes than we started with. A church in a nearby town held their pageant earlier and sent us two boxes of amazing costumes. The Halloween costume store salesperson listened to my plea and helped me gather a menagerie of animal ears for children and gave me half off the price of everything. The store had no lamb ears, but giraffes, fox, zebras, puppy dogs, and some elephants made an appearance at the stable.

A creative member spent the afternoon finding patterns on Pinterest and made several sets of lamb ears that were anything but Pinterest fails; they were, in fact, perfect for little ones to wear. A Facebook friend shared quick costume ideas, and offers of help overflowed.

And the night of the pageant? Joy and holy chaos reigned as children costumed themselves in a wide array of pageant finery. Parents laughed, children rejoiced, and the pageant debut of Butterfly the Pony and George the Donkey brought so much effervescent glee and tangible love into the space that it spilled out the doors of the church into the neighborhood around us.

The pageant had gone from moments of distress to an embodiment of joy and generosity in a span of hours.

Love came down at Christmas to remind us of this truth. We make plans, we have ideas, and we depend on things. Plans go awry. Ideas are wrong. Things don’t always work out. Other things go missing or are lost. Sometimes they are stolen from us. And we wonder why and how.

And eventually, hopefully, we ask, “What now?”

And God responds in the generosity, unselfishness, creativity, and love of others, often in unexpected ways.

We’ve heard the Nativity story so many times we can forget it is filled with the unexpected, the unplanned, and the surprising. It's a narrative of how not to spend your last days of a pregnancy, where not to have a baby, and how not to welcome God Incarnate.

Except it is exactly how God chose to do all those things. In the midst of how we humans would rather not do things, Christ is born.

In my final moments of Advent, worry and frustration gave way to love born - again - in an unexpected way. Watching the children laugh with glee at a LIVE PONY AND DONKEY, seeing the fox and giraffe welcome the Newborn King, and witnessing the fire marshal (one child wore his Halloween costume for the pageant) lead the singing of Joy to the World, I gave thanks for the God who removes things we think we need and gives us what our souls truly desire. 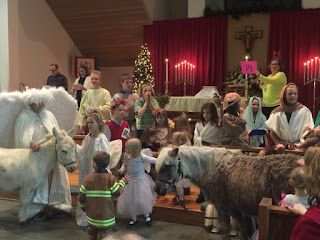