The Japanese have an ancient art form called kintsugi, that is, the repair of broken pottery with gold or other precious metal, elaborate staples, or other means to add to the value and interest of the object. It’s almost such a perfect metaphor for reconciliation I can’t believe it’s really a thing.

Art historians explain that Japanese culture valued the wear that an object collected over its use as making it more beautiful and valuable. Cracks and breaking were events in the life of an object, so mending those cracks highlighted the story.

I suspect some of this repair instead of discard came during a time when Target wasn’t on every corner, so when your favorite tea pot got knocked off a table, you found a way to repair it or you didn’t have a tea pot for while.

Our western sensibilities are more inclined to throw away a broken vase or bowl and get a new one or repair it in such a way that the break is concealed and the item looks the same as before.

Once something has been broken, it is intrinsically changed. Cracks, however nifty the glue may claim to be, cannot be made to go away completely.

Kintsugi art is a very tangible reminder of a truth Jesus spoke over and over - and lived in his life - that broken does not mean destroyed.

But it does mean broken. We humans break things. Our clumsiness with each other’s souls means we will, sometimes inadvertently, sometimes quite deliberately, knock into each other and stand in the shattered remains of a relationship.

And we have several choices. We may act as if the broken pieces aren’t there, or that we have no idea how they got that way. But confession reminds us those aren’t long-term options for people of faith.

When we do recognize the broken pieces of souls we’ve played a part in shattering, often we begin by longing for things to go back to the way they were. We hurriedly piece together the hurt and damage and stand back, thinking if no one pushes to hard or tries to touch it, it looks just like it did.

Until someone does push to hard, as they always do, and we’re right back with the broken pieces, and usually more brokenness that we had to begin with.

Another particularly unhelpful response is to walk away and find a new teapot, bowl, friend, partner, spouse, or community to replace the broken one. After all, leaving the broken parts behind for someone else to clean up is oh so easy. We leave what is broken and imperfect. But after a while, when we look back, do we see a path littered with shards and splinters and wonder?

Hopefully - eventually, we seek or wander aimlessly into or are surprised by reconciliation. While wiser theologians than I have written extensively about reconciliation, I experience it as the art of repairing what has been broken.

Reconciliation is an art. It looks varied and different for each of us and for each break. Sometimes the beauty of it is readily apparent; other times, we need time to appreciate how the cracks have been mended and stitched together.

God’s holy repair, because we as broken vessels offer ourselves to God for repair, illuminates the breaks, cracks, and chips and allows them to become part of our story, even sometimes part of our deep beauty. God edges our broken messes with grace and binds them together with mercy until the part is reconciled.

Reconciliation does not mean ignoring the break. We may desire to return to the relationship as it was before it was damaged by sin, but that doesn’t happen. Instead, through confession and forgiveness, we acknowledge the break and recognize the damaged it caused (even perhaps our part in the damage) and the pieces left in the wake of sin. Reconciliation sees the break as part of the history, instead of our almost always unsuccessful attempts to act as if the break never existed.

Sometimes what is repaired looks similar to what was broken, but with a new history and a new beauty. Some relationships, broken and reconciled, become stronger and more illuminated. And, after a while, we may come to see the lines of God’s mending art as something that was almost always there and can't imagine the thing without them.

Sometimes what is repaired is something wholly new. Even for kintsugi art, not all bowls broken will return to their original use. Some reconciliations mean what had been will not be again, and we may feel grief and relief and other complicated emotions as we trace the lines of the breaks and work to accept this different-ness.

And some reconciled brokenness will look beautiful only from a great distance. This is where the metaphor doesn’t work, because some relationships, like some bowls and teapots, can be so broken no amount of precious metal or time will reform and repair them. But I believe these, too, are healed in some way by God, even if we only experience that fullness of healing and reconciliation across a distant shore. 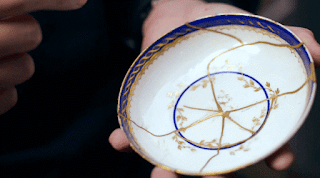 Unknown said…
And Holy Spirit shows up and tells me to look at yet another thing that I needed to hear.

Unknown said…
And the Holy Spirit shows up with another message I needed very badly in my life.

Ansku said…
Laurie, I just finished reading your book and want to thank you. It was engaging and deeply moving. Which is also this blog. I appreciate your smart thinking, honesty, wit, openness and profound spiritual insight.
March 14, 2016 at 5:08 PM

DiAnne said…
Hi,
I stumbled on this post while searching for best practices for repairing a fractured ministry. This entry was so timely (and very well written). Thank you for sharing this fitting perspective.
January 4, 2017 at 8:02 PM