The biggest question I get from clergy who want to engage in social media for their churches but aren't yet is, "How do I start?"

This post won't tell you that, exactly, but it does contain some thoughts I've gathered while leading workshops on social media and things I wish more people knew while "doing" social media. This is not an exhausted list, but it's a start.

1. Not all social media is created equally. Facebook, Twitter, Tumblr, Instagram, Google+,Snapchat...all have their strengths and weaknesses. To be active on social media is not to have an account on every social media option. It is to be discerning about how and why you use social media. Which leads to point 2...

2. Figure out your social media strategy. Want to post only pictures of your church because it's so architecturally stunning or because you have a photography ministry? Instagram may be your friend. Want to write long dissertations on the value of Anglican chant? Twitter is not for you. My experience is that most successful social media strategies are focused, using 2 or 3 platforms in different ways. Also, social media is NOT just for gaining members in your Church; it's a way to share to an entirely new audience.

3. Social media is just that...social. Social by definition means we use it. Having a Twitter or Facebook account where you post once or twice a month it akin to going to a party and standing in the corner, talking to 1 or 2 people the entire night. Don't be surprised if you aren't invited back, and don't wonder why you don't get followers.

4. And while we're talking about followers...unlike our church attendance numbers we inflate to make us look more popular than we may be, social media is, in many ways, a numbers game. So notice your numbers. How many people follow you on Twitter? How many likes did certain posts get (Facebook loves to tell you which posts perform well)? How many reads did your blog post get? Pay attention to retweets. And use those numbers to modify and adapt how you use social media.

5. Don't post the same things on all your accounts.  Some crossover is okay - and needed, but seriously, it's safe to assume that those who follow you on Twitter also follow you on Tumblr. Use them differently because they are different.

6. Social media is cutting edge, which means it's changing constantly. Facebook has become the domain of middle-aged and older users, as teens and young adults are leaving in droves. While it may have been a great way to connect to youth ten years ago, not so much now. Twitter wasn't a serious player a few years ago. Now...it's a big gun. In five years, it could be passé.  Social media is not the Good Friday sermon you write once and use over and over again. Being engaged means we have to keep learning.

7. One social media strategy does not fit all, personally or corporately. I have clergy friends who do not friend parishioners. I have others who have a personal and a professional account. Still others don't have personal accounts at all (although I do question the wisdom of asking your church and congregation to engage in something you don't bother to do personally). Some constants, however, include no tagging of youth and children, no trolling, and no bullying. Also, if all the pictures on your church's Facebook page are about one person (perhaps the clergy in charge...) not good.

8. Get over people using social media in Church. Seriously. I've heard clergy say, "But I want people paying attention during the sermon." I hate to break it to you, but people day dream, flip through the hymnal, and make their grocery lists during sermons. We probably need to lose the fiction of, "If they're sitting quietly, they're paying attention myth." If they are sharing that they're at church, the words of the Gospel, that the hymn was particularly beautiful - that's evangelism. Last I checked, we want to encourage evangelism.

9. What to put on a social media site? That depends on the site, but as a rule, I have found that podcasts of your sermons and the weekly parish newsletter are not popular posts, unless Desmond Tutu gave the sermon and Stephen King is writing your weekly parish newsletter. Images, prayers, interesting links...all are good places to start. Explore other sites that are popular. What are they posting? How are they using these sites? Also, avoid constant use of what I call the restatement of the obvious posts. If you check in at St. Swithen's, don't then post, "With the good people of St. Swithen's." Tell the audience why you're there, what's going on, what's exciting, what'd odd, what's funny. Engage the audience.

10. Don't reinvent the wheel. There are many people who've been engaged in social media for years. Read, learn, and inwardly digest their work. I recommend Meredith Gould's The Social Media Gospel as a good place to start.

So there are 10 thoughts. I could add so many more, but it's a start. And it's time for lunch. And no, I will not post a picture on my Facebook page on what I'm eating. Peanut butter and jelly isn't all that interesting. 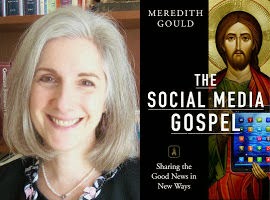 Meredith Gould said…
Thanks for the shout and I do hope your readers get my book, and not just because I want to put cat food on the floor. It will help them think through strategy issues.

After years of doing this work, I can say that strategy is where most social media efforts collapse because people don't think through who they want to reach and why. Or, who they think they want to reach ("the unchurched!") and why ("boost attendance at worship!") is stunningly unrealistic.

As for lunch tweets/posts, for the record: I like 'em if they're accompanied by gorgeous photos and recipes!
March 1, 2014 at 12:45 PM

Unknown said…
It is always baffles me how scared people are of social media; until one day someone thanks them for a post that helped bring them to Christ.
March 1, 2014 at 3:00 PM