The recent snow and ice days (of which I have had entirely enough of, by the way) have led to my copious use of Netflix and Amazon Prime. I hit a few documentaries, so now I don't trust anything I eat, and, depending on the viewpoint, should graze on organic grass or drink 17 gallons of water a day. I've binged watched Derek (recommended viewing for chaplaincy and pastoral care insight) and Vikings. I'm convinced we might handle grief better if we did funerals more like the Vikings. Lots of fire and swords.

I eventually returned to one of my all-time favorite series, Friday Night Lights. Really. If you haven't watched it, I commend it to you. During the course of viewing all seasons, I began to realize Coach Taylor and his amazing wife Tami live a life remarkably similar to clergy. Granted, people are usually more excited about football than they are Church, but that notwithstanding, the similarities are quite striking between a football coach and a minister. For example:

1. Your job, for most people, is fully visible on one day. From the game on Friday to the service on Sunday, that's when you are front and center. For the most part, no one has any idea what you do for the other six days, and a few probably think you don't work for the other days. For many, your entire value is limited to a few hours on that one day. Pressure...

2. Many people feel very comfortable telling you how to do your job on that one day. From whether or not you utilized the running game enough to the hymn selection during Lent, many have an opinion on what you could do and how you could do it better or some other thought or idea that they are very willing to share.

3. People who watch you do your thing on that one day a week are also very okay with sharing their thoughts and opinions about your work or life with your spouse/partner or children (yes, even children) in the line at the grocery, while out walking the dog, or any other personal time. Nevermind that your spouse/partner or child never coached a game or went to seminary...

4. We both work with teams/congregations of very disparate people coming together, sometimes not so easily, for a common goal. Football players each have their particular strengths and positions to play to make the whole a success, and the members of our congregations have their particular strengths and positions to share the Gospel. Of course, success in football has a much clearer objective than success in a faith community. Many times, a faith community can't even agree on their goal. Then again, that's also part of the coach's/clergy job - seeing the vision.

5. As the coach, the team's failures are perceived your fault. I suspect most clergy feel that same.

6. The real work of your vocation, from coach to clergy, is most often done away from the eyes of the people you serve. Coaches watch film. Lots and lots of film. They draw up plays. They assess the skills of their team and evaluate and reevaluate. And they worry. Clergy do their own kind of film watching, usually in the form of prayer and study, to prepare themselves and their congregations for worship, for Christian education, and for meetings. We work the details of church services which do not just happen. We listen to the needs of our congregations and pray and make decisions regarding how those needs can be met, usually on a much more limited budget than a football team has.

7. Coach Taylor and his awesome wife Tami (by the way, did I mention how amazing Tami Taylor is?) have a personal life that brings its own level of stress and anxiety. And just in case you wondered, so do clergy.

8. There are rarely clear boundaries between a personal life and a professional life. Coach Taylor often has players show up on his doorstep late at night with problems or concerns or just a random visit. He may have been sitting down to a long-delayed dinner with his wife, but that all gets put on hold in the blink of an eye. Clergy experience the same whenever we get that late-night phone call or visit. Our time, even when we're "off hours," is not entirely our time.

9. We both get to wear uniforms, but clergy have better ones on Sundays.

10. And in that moment when it all comes together for a win, whatever that moment looks like (and for clergy, it's almost always a very quiet, holy moment not played out in front of 80,000 people), it just feels amazing. 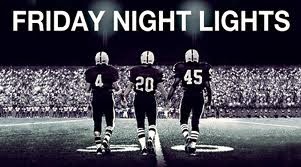 Unknown said…
There's another way priests are like coaches. They're tempted to think that the outcome of the game depends entirely upon them, and then they become control freaks who end up alienating their players. It doesn't. Coaches don't win the game. The players do. Good coaches prepare the players to do their best, as a team.
February 6, 2014 at 10:10 AM

Susan said…
Great insights. Being in the pastorate with my husband for years, you're right on.
And, on a completely unrelated note, I love the background to your blog - beautiful watercolor!

Anonymous said…
Hi there,
A friend introduced me to this blog and I just love it.
I have nominated you for a small/informal blogger award called The Sunshine Award. You can read about it here: http://mrsjonestakesaleapeoffaith.blogspot.co.uk/2014/02/day-240-sunshine-blogger-award.html
February 7, 2014 at 1:10 PM