Has it been two years?

That's what I thought as I made coffee on this July 4th in my kitchen in Lexington.  Those moments where the time-space continuum doesn't seem to make sense need to be shared, so I promptly called the other half of the Dirty Sexy Ministry team and asked her the same question.

She thought the same thing.

Oh yes, a mere two years ago, we had the nefarious Declare Your Independence Party in the Garden District of New Orleans.  You entered the home to a stack of plates from the dollar store and a bunch of permanent markers.  Select your plate.  Grab a marker and your beverage of choice, and start celebrating.  Through the night, we encouraged everyone to write on the plate (or plates, depending on who and what had been living in your soul rent free) all those things from which we declared our independence.

The names of ex-wives and ex-husbands and people in our lives that sucked the life out rather than infused us with spirit.

The people whose friendships had been hurtful and wounding with no hope of immediate healing.

The situations that felt overwhelming and oppressive.  The anger that needed to be released.

Family issues.  Job issues.  Too much grief.  Too little hope.  Paths that had come to an end and the fear that accompanies stepping onto a new road.

Then, as fireworks and a few gunshots celebrated the birth of this nation, people smashed their plates into thousands of pieces on the back patio. And smashed.  And smashed some more.  Someone started saying the words written on his plate aloud, and others joined in.  As words were spoken and plates were smashed, people clapped and cheered and cried and released emotions that had been begging for daylight.  We were quite amazed at how much people need to be freed from in their lives.

Mary and I cleaned up those thousands of little pieces of the shackles of people's lives the next morning.  The crashing noise as we dumped those pieces into the bin did not help our headaches, but we got the priestly task of taking the shards and tossing them into the trash.  Right where the things that shackle us belong.  And we said some prayers that all the written words broken into a million pieces (they seemed to multiply as we kept sweeping) would be redeemed by God, somehow, someway.

And to both Mary and me, two years feels like a lifetime ago.  The things we had written on our plates were redeemed by God - with a deep amount of work.  That's the rub, isn't' it?  That we want change and newness and all the painful things in our lives to disappear, but we aren't too keen on the soul work that goes into getting to that new place.  Quite honestly, believing that such massive and holy change just happens is like believing all was fine and dandy with the newly formed United States after some white male property holders took quill to parchment on July fourth.

Massive change takes massive work, and most of that holy work occurs while we are simply being.  Boy, we hate that, too.  We want something to do when many times, God simply asks us to be patient while She shifts and moves things.

Mary and I decided to break plates while we waited.  It was something, right?

Harriet Tubman said of her emancipating work, that she freed thousands of slaves, and could have freed thousands of more if they only knew they were slaves.  Most of us gathered that night had no illusions that the names and things we wrote on our plates would somehow just magically be made all better on the morning of July 5th.  Well, we hoped, but no such luck.  Yet in those moments, surrounded by laughter and friends on a hot summer night, we all perhaps found that small amount of courage to admit we were indeed enslaved by shackles and chains of many things - unhealthy relationships, long-festering anger, hurtful patterns, blaming others, diminishing ourselves - to name a few more popular ones.

So we wrote them down.  And smashed them to bits.

Saying things out loud or writing them on cheap pottery made them real.  No more vaporous words.  The things that enslaved our souls were written in bold marker.  A great tragedy I see in the lives of many is the unwillingness to admit that there are things from which they need to be emancipated.  They would simply rather be slaves to their many hurts and to their own darkness; admitting their enslavement would be too damaging to a fragile ego.

But when the cracks start to form and the ego begins to crack and the shifting begins, something miraculous can happen.  Light flows through the breaks.  God's light.  Holy light.  My life had started to change long before that night.  The slow movement of holy creation had begun with the stirrings of my soul and the breaks in the surface, but on that night, I felt a sure and certain hope that my present would not be my future.  I knew, fully in my heart, that only in our brokenness can the light of God fully shine through.

So much has changed for both of us in two years.  People who were in our lives are no longer living in our souls rent-free.  New, joyful friends have appeared.  We both have new communities of faith to serve in places that seemed an eternity away two years ago.  We are both doing things in our lives we simply could not have imagined two years ago - being a mother, writing a book, even riding horses competitively.  Weeping may spend the night, or a few weeks or months, but dawn does come.

There are more chains and more struggles.  There always are.  More lessons to learn.  More words to write and plates to break.  But for now, looking backward and giving thanks for the brokenness that leads to freedom is enough.  For now, seeing how far away back there seems is enough. 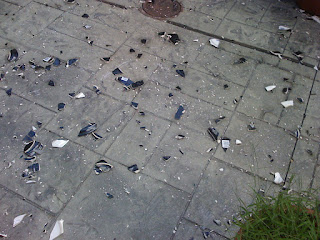