In a moment of, "I need to take a mindless break" a few days ago, I did what many Episcopal priests (and perhaps a few other liturgically-based clergy) do:  I looked at vestments online.  I just happened to be called to serve in a church that blends high fashion and prayer in one nifty place:  church vestments.  Vestments, like all fashion, has its highs (copes and maniples) and lows (cassock, surplice, stole); its ordinary (polyester blend) and fabulous (hand-embroidered silk); its absolutely stunning (Holy Rood) and its you should have let someone else with fashion sense select vesture.  I, of course, found this glittering gold silk embroidered number complete with maniple.  I decided it would look great with my snakeskin heels, but also figured there were better ways to spend money right now, as well.  I did post it on my Facebook page to share, and wondered how long my other liturgically-oriented friends would take to notice the maniple.

Maniples, for those of you not so inclined to high church, are now ornamental vestments, worn only during the actual Mass by subdeacons, deacons, priests, and bishops on their left forearms.  There are all sorts of rules about when it is and isn't worn that are neither here nor there for most of us, because most clergy I know have never worn one, nor would care to wear one.  They are often strips of beautifully embroidered fabric with loops and bands to keep it on one's arm during the celebration of the Holy Eucharist.  It's almost fallen out of use, actually, probably with the advent of air conditioning, as it seems to have originally been a holy handkerchief, used to wipe sweat away or any wine that got spilled by clergy.  Apparently, even ancient Christians frowned upon drops of sweat falling on the bread and wine.  All of the clergy assisting at the holy meal wore it, like a really well-heeled maitre'd, to clean up any messes.

A friend of mine had a seminary professor who bewailed that the servant ministry of the ordained began dying when they quit wearing maniples.  I'm not sure that the demise of clergy who remember and actively live their vows of service and obedience can be traced to the lack of a strip of fabric among vesture, but the prof recognized something - that we clergy types are indeed servants, holy waiters who prepare and serve the holy meal, who clean up messes when we can, even make a few every now and then.  When we forget that, we lose part of our selves.

Being a servant isn't something most of us like.  We might like the idea.  If I had a dollar for every priest I've heard talk about "servant ministry," I could buy that chasuble I saw with money left over for two pair of new shoes.   Watching the classic British miniseries, "Upstairs Downstairs" and its newer cousin, "Downtown Abbey," I see servant ministry in a more tangible way.  The servants are the foundation of those homes with their cooking, cleaning, listening to the conversations, responding to what needs to be done - all while having their own lives.  If you haven't seen either, they are worth a look.  Our modern sensibilities are not so attune to the reality of servant hood because most of us have never seen servants.  We've had the creative freedom to make servant hood as painless and fun as we'd like, rejecting the parts that don't work for us because we'd be more servant like and less boss.  I wonder how many clergy would do as good of a job as the servants in, "Upstairs Downstairs."  I wonder how many would see that work as beneath us, instead opting to be the bosses who live upstairs who quite unaware of the servants' work.

As are maniples.  When worn with a chasuble, they blend in.  Celebrating with one requires a bit more attention, lest you whack the chalice with the band of silk and really have a mess to clean up.  But even if we do, that's okay, because good servants know how to clean up elegantly, as well. 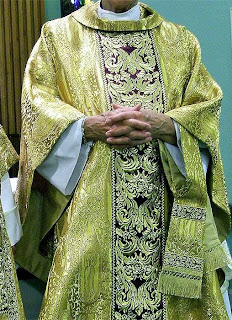 Angel said…
Please tell me you have already encountered http://www.badvestments.blogspot.com/ =) My husband is in seminary and it is one of our favorite laughs!
February 17, 2011 at 2:20 PM

Anonymous said…
It is too bad that "servant" ministry is too often translated as "low paid domestic laborer" ministry. It only works, I think, where the servanthood is shared and the laity take on servanthood too. Priests are models of what everyone should be doing.
February 17, 2011 at 5:41 PM

Alex said…
I was Anglican (Canadian Episcopalian) when growing up and used to think vestments quite wonderful. My two brothers are currently priests in the Church and wear vestments. Part of me thinks they have their place, certainly, but are really unnecessary in the servant ministry. I tend to think now that they put the clergy 'above' the laity somehow, when in fact the two groups should be equal before God.
February 18, 2011 at 12:36 AM

LKT said…
I would like to award you with the Stylish Blogger Award. Thank you for a terrific blog. I enjoy it very much.

I realize this does have the whiff of a chain letter about it, but the directions I got were:

1. Accept the award, post it on your blog together with the name of the person who has granted the award and his or her blog link.
2. Pass the award to 3 other blogs that you've newly discovered.
3. Remember to contact the bloggers to let them know they have been chosen for this award.

Surreptitious Evil said…
"Upstairs, Downstairs" is back - set in the same house, forward a few years to the 1930s. One series made and shown, another (moving towards WW2, I expect) on its way. Well worth a look once the Beeb send it your side of the pond.
April 19, 2011 at 12:39 PM