You can't live in Louisiana for any length of time and not pick up some of the culture of the state whose earliest inhabitants included pirates and voodoo queens. I prefer Cafe du Monde coffee, because the rest of the free world sells plain coffee, not the stuff that can also double as paint thinner; Tony's spice, which adds a kick to anything edible; and Tabasco.  Only Tabasco.  It's a weird Louisiana thing that there's Tabasco and everything else.  And I talk about good ju ju. That, actually, is more from Clint's vocabulary as well as Louisiana culture. He's also an interloper in Louisiana. But he's a connesiur of good ju ju.

Good ju ju? Some people call it good karma, good luck, or blessings. It's an old voodoo term that has been appropriated in the Mary-Laurie-Clint vocabuluary to be a particular blend of joy, redemption, and laughter. We do not practice voodoo or even know enough about it to keep us out of trouble; we do practice seeking that which is overflowing with joy, redemption, and laughter. Good ju ju can flow into your life when the temptation to allow fear, negativity, and hopelessness sour a person, place, or experience. Good ju ju makes a bad movie fun because you and your friends comment mercilessly on just how bad it is. Good ju ju are the words that someone who loves you says after you've done the whole ugly cry thing, complete with red, puffy eyes and a runny nose, and you hear yourself laugh. Good ju ju sends us back to a place with negative memories and invites us to let joy redeem the space.

So after living in Lexington all of seventy-two hours, Clint and Laura, another friend who excels in good ju ju, showed up at my new home. We could have unpacked some more. We could have organized the three thousand books scattered over the floor. We could have, but we didn't. Instead, we decided to drink in some local Kentucky culture at a bourbon distillery.

As usual, we found humor in things seemingly normal. We touched the spongy funk that develops on the top of the fermenting sludge that will eventually become bourbon and asked if we could taste it, too. The tour guide seemed mildly disconcerted by this request. Apparently, people don't generally think tasting said sludge is a neccesary part of the tour. She said it's probably safe, so we tasted (imagine beer mixed with soggy bread). We took silly pictures, because how better to commemorate a visit to any place than with pictures that demonstrate distinguished and aristocratic are not the image you're going for. We even signed a bourbon barrel with full titles: The Reverends. That is perhaps the holiest bourbon barrel in Kentucky.

I'd been to this distillery before, but the visit was definitely not this much fun. As I stuffed another bourbon ball into my mouth, I said so. Clint smiled.

Good ju ju may just be an ecclectic word for love. Like love, it almost never exists in isolation. It's a bit elusive to describe, but we know it through the sound of laughter, the smile that can't be contained, and the moments where we forget ourselves and surrender to the exuberance of life.

So this week, here's wishing good ju ju to all. And chocolate bourbon balls in every kitchen. 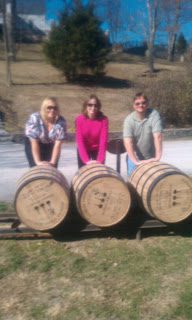